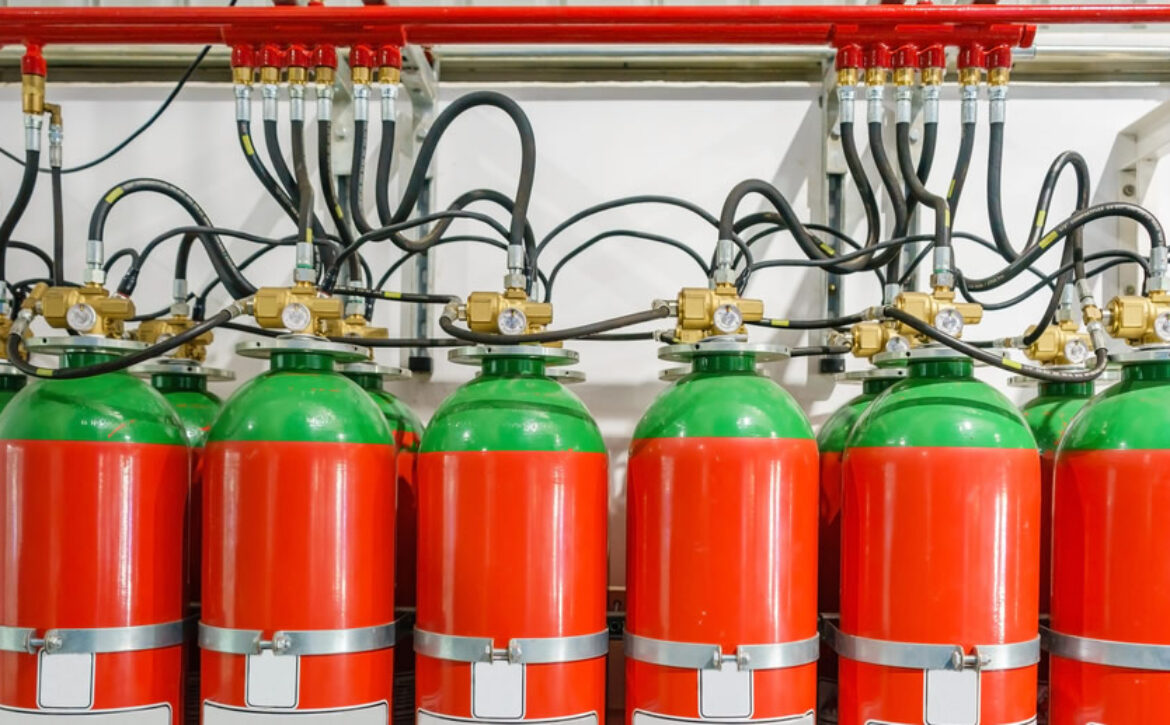 As the common phrase goes: We plan for the worst and hope for the best. Deciding on how to respond to a potential fire threat is critical for businesses of all types. We hope that the need for a response to a fire will never arise, but it’s crucial to plan appropriately.

Many of us are familiar with the extended, historical use of water and sprinklers to protect against fires. But the world of fire suppression systems has evolved dramatically over the past century. Resources are now available to us that were not even thought of a half-century ago. Scientific developments have provided considerably more dynamic and suitable means of responding to the ancient threat that fire poses.

What are the different types of fire suppression systems? 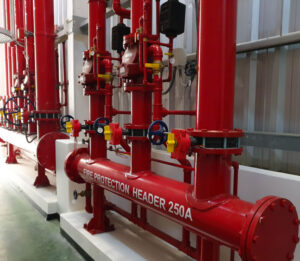 For instance, fire sprinkler systems would be identified under the category of protection. These systems are used across the globe in commercial and residential locations. They rely on various types of water distribution to contain and eliminate the threat and spread of fires.

In contrast, a fire suppression system uses varying alternatives to water. These substitutes for water may include resources such as gas, chemicals, or foam. Suppression systems seek to assert action before a fire gains the chance to spread. And they can often provide benefits that can’t be found with more traditional sprinkler systems.

At its most basic, a fire suppression system is a means of identifying, controlling, and extinguishing a fire. These systems of suppression rely on agents other than water to respond to the threat of fire. Using these alternatives has proven to offer various benefits, such as protecting against damage to sensitive equipment and more effective fire prevention. Suppression systems aim to act before a fire can develop or spread through a building or space—often activating more quickly than traditional fire sprinklers.

Inert gas suppression systems’ primary function is to remove enough oxygen in a space to eliminate the potential combustion of a fire. Most gas systems are preferred for uses in buildings where humans might be present. Unlike using CO2, inert gases remove enough oxygen to prevent fires but not so much to pose possible suffocation to occupants.

Beyond their general safety for humans, inert gases also offer the benefit of being safe for sensitive equipment such as computers, televisions, and phones. They are also classified as “clean agents” because they do not cause damage to the ozone layer or contribute to global warming. Examples of inert gases might include inergen, argonite, or nitrogen.

Suppression systems that utilize CO2 also rely on their ability to remove oxygen rather than extinguish heat. Unlike inert gases, however, CO2 extracts too much oxygen for occupants to avoid suffocation. As a result, this type of suppression system is not used for buildings or spaces where humans are present. Instead, they are commonly used for very confined applications or areas not accessible to personnel.

Generally, using CO2 suppression systems is also not recommended for use in areas with electrical equipment. Carbon dioxide is stored at frigid temperatures and can pose the risk of thermal shock to hardware or electronic components.

There are numerous reasons for how these suppression systems came to be understood as using “clean agents.” For one, they are safe for humans. But they also do not pose a significant risk to the environment. They also have a meager impact on the atmosphere or global warming. Finally, clean agents evaporate and do not leave a residue after being discharged to suppress a fire.

Clean agents can be stored as a liquid or gas. Discharging a clean agent releases the storage chemical(s) as gas to suppress a fire. The gaseous discharge can serve the purpose of disrupting up to three different elements that can sustain a fire: a fuel source, oxygen, or heat. The clean agent also commonly acts very quickly—distributing highly concentrated levels in around 10 seconds. This quick and effective execution makes clean agents efficient at suppressing fire before it can cause significant damage. 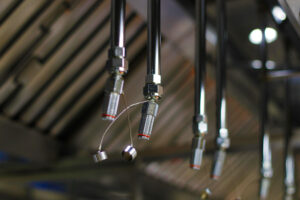 Water mist suppression systems present the advantages of immediate activation, environmental and human safety, and minimal to no water damage. Because the fine mist evaporates quickly, these systems are primarily considered safe for sensitive equipment and supplies.

At WFX Fire, Lock, & Security, we are committed to ensuring you have the most reliable and trustworthy resources for fire suppression systems. Our team can ensure that your installation is conducted with the utmost professionalism—while also providing maintenance to ensure your systems keep you safe in the long run. 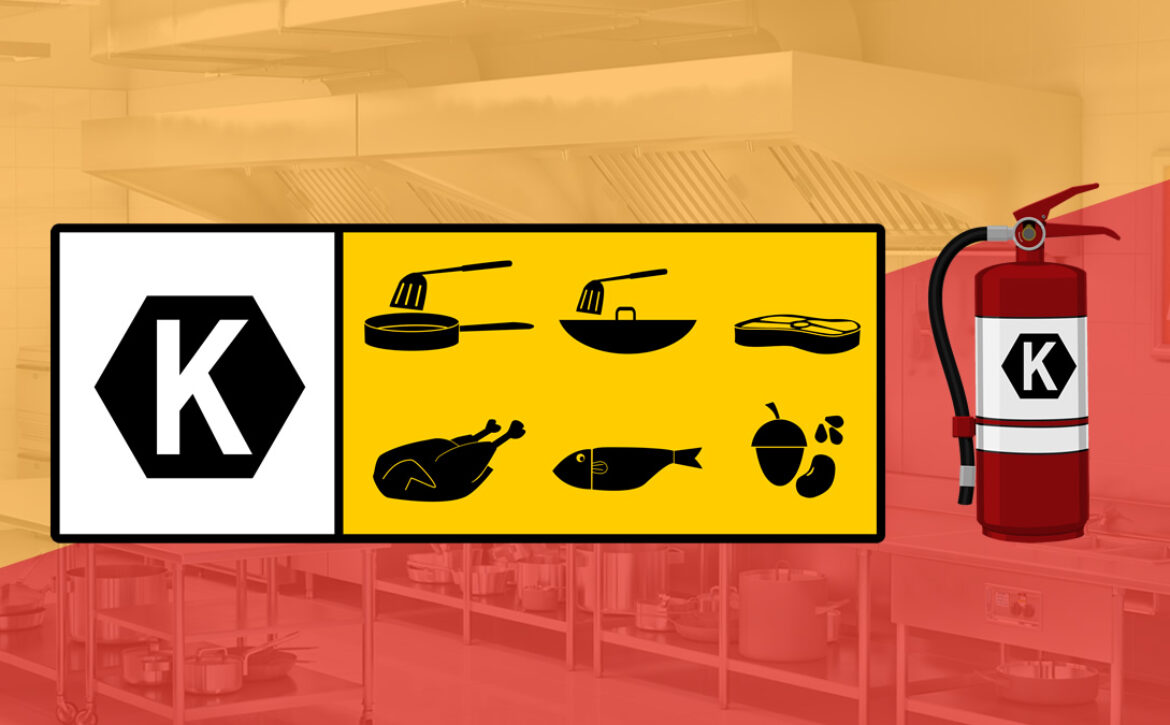 What is a “K” type fire extinguisher

According to the US Fire Administration (USFA), there were 1,291,500 fire incidences in the country in 2019. These fires led to 3,704 deaths, 16,600 injuries, and losses amounting to 14.8 billion US dollars. Fires are typically classified according to the type of fuel that feeds them. One of the most dangerous and stubborn fires to combat is the Class K fire, common in commercial kitchens. These fires can only be fought effectively with a unique extinguishing agent found in a Class K type of fire extinguisher.

What is a Class K Fire Extinguisher?

Fire extinguishers are classified depending on the type of fire that they will extinguish. A class K fire extinguisher is used to control fires involving cooking media such as oils, fats, and grease commonly found in cooking places such as commercial restaurants.These fire extinguishers work through saponification to extinguish flames completely.

Saponification is a chemical reaction that occurs when alkaline mixtures come into contact with fat or cooking oil. Ideally, the alkaline mixtures combine with the fatty acid to create a soapy foam on the surface, which effectively separates and absorbs the fire’s heat elements (the fuel, heat, and oxygen). The fire extinguisher intended for fighting a Class K fire is labeled with the letter K so users can quickly identify it during emergencies.

Only a Class K fire extinguisher will be effective for Class K fire and must be kept within reach in a commercial kitchen setting. The right type of Class K extinguisher should effectively separate the fuel from the oxygen and adequately absorb the heat elements and smother raging kitchen fire effectively.

How to Improve Workplace Safety with Class K Fire Extinguishers?

OSHA requires commercial properties and employers to choose and distribute fire extinguishers depending on the classes of expected workplace fires. The size and degree of the hazard should also be considered when selecting a fire extinguisher.

The following are some ways to improve workplace safety with a Class K fire extinguisher:

Unlike the other classes of fire extinguishers, there is no distance requirement for Class K extinguishers. According to the OSHA requirements, the extinguisher to be located at the point of anticipated cooking for ignition. However, some local requirements may be stricter, and employers should check and be familiar with their local marshal and insurance agent. In general, extinguishers in a commercial kitchen should be located as follows:

For the Class K fire extinguisher to be effective during emergencies, employers should provide a suitable educational program to equip employees on the fire extinguisher’s principles and use. Ideally, OSHA recommends that the training be done during the initial hiring and once a year after that. Most types of extinguishers operate using the PASS technique:

Repeat the last three steps if the fire reignites.

Portable fire extinguishers should be visually inspected each month. The inspection seeks to determine the following.

It is the employer’s responsibility to ensure the extinguisher is maintained, inspected, and tested by a licensed expert. Maintenance should be done at least once a year or more, depending on the level e of risks. The employer should record the maintenance date and keep the records. 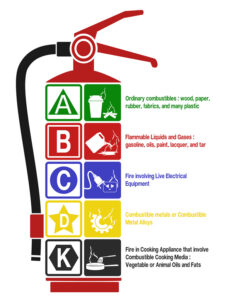 Can I Use a Class K Fire Extinguisher to Fight a class A Fire?

If the class K fire spreads to Class A fire materials in the kitchen, control the flames using the Class K extinguisher. However, you should not use a class A or Class B and other classes of fire extinguishers to fight a kitchen fire started by cooking media such as oil, grease, or fat.

Do You Have a Suitable Fire Extinguisher?

Fires are more likely to occur in restaurants than other types of businesses. The suitable fire extinguisher should protect your kitchen and workplace. WFX provides exceptional fire security solutions for both commercial and residential properties. Our experts will do both initial installation and routine maintenance to ensure your fire extinguishers and fire suppression systems provide adequate protection.